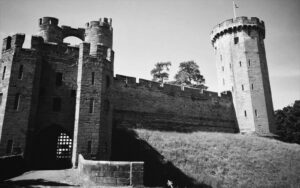 The Haunting Nights have be conducting Paranormal ghost nights for many years, Warwick Castle is up there as one of our very favourites and the team cant wait to visit again soon.

Warwick Castle, which is located in Warwickshire, England, has over 1,100 years of history, from being attacked in 1264, to getting besieged in 1642, and being damaged by a fire in 1871.

Several Earls of Warwick were in charge of the castle until 1978 when The Tussauds Group (now the Merlin Entertainments Group) took over the property.

The castle was named one of Britain’s “Top 10 historic houses and monuments” in 2001 (along with Stonehenge, Tower of London, and Edinburgh Castle) and receives around a half a million visitors each year.

Not only does the castle have an extensive history it’s also said to be haunted by numerous spirits including apparitions of animals.
Let’s take a look at some of the Ghosts that are roaming around one of England’s most haunted locations.

Many people who have been to Warwick Castle have reported seeing the apparition of a black dog that stalks visitors. The canine was reportedly cursed by a woman named Moll Bloxham who was punished publically for stealing.

Dogs aren’t the only ghostly animals that have been seen on the property as several exotic pets including Chinese geese, Japanese deer, a baby elephant, an ant bear, and an emu have all been allegedly seen.

One story in particular was that the ghostly emu chased a bishop throughout the grounds of the castle.

The pets were owned by the Countess of Warwick in the 1890s.

The spirit of Sir Fulke Greville is often seen and heard in the castle – specifically in the South Tower where he was killed in 1628 by his servant Ralph Heywood who was said to be quite upset when he found out that Greville didn’t include him in his will.

They apparently argued and that’s when Heywood stabbed Greville to death before turning the knife on himself.

Some people who have visited the tower have reported hearing unexplained arguing.

What’s even more eerie is that there have been reports of a human-shaped figure coming out of a picture of Greville as well as people seeing his ghost walking through the Chapel corridor.

An aggressive entity has been reported in Caesar’s Tower as well as the castle’s dungeon and in a labyrinth of rooms called the Kingmaker. Additional paranormal activity includes seeing orbs of light; feelings of being grabbed, pushed, or watched by an unseen entity; seeing shadow figures; hearing growls (especially in the dungeon); and unexplained temperature fluctuations.