The UK’s Most Haunted Pubs With Haunting Nights

Ghosts and ghouls are reported in some of London’s oldest and most-loved public house, many of them with truly hair-raising tales behind them! Haunting Nights takes a look into some of the UK’s Most Haunted 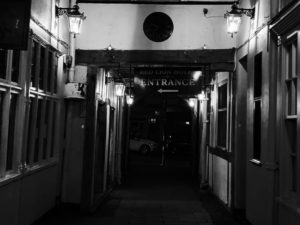 The Red Lion Hotel is haunted by at least 3 different ghosts that have remained at the hotel long after their deaths. For over 200 years the hotel had an instant dismissal rule for any employees caught mentioning the ghosts, in fear of scaring away customers

The Hotel was built in 1465 and is located in the centre of historic Colchester. The Grade I listed building is one of the oldest inns in East Anglia and has been described as ‘a fine example of Tudor England’. The Inn’s Parliament restaurant, with its beamed ceiling, was once a banqueting hall, and was the setting for Oliver Cromwell to hold official parliament meetings.

The most active spirit that has made herself know during ghost hunts here is that of Alice Katherine Millar, murdered in 1638. Her ghostly apparition was reportedly so frequently that, the owner of the Red Lion Hotel bricked up the doorway to her old room. He hoped that this would stop her ghost from appearing in the hotel. Guests have reported seeing Alice’s ghost in rooms 5, 6 and 10, her apparition has also been seen in the kitchen and walking through the bricked up doorway which once led to her room.

Recently the assistant manager at the hotel woke up at 3am like a bolt of electricity had gone through his body. As he looked around the room a beam of moonlight landed on the rocking chair next to his bed. As he watched, it began to rock backwards and forwards, slowly Alice appeared sitting in the chair. She spoke to him and asked “are you alright?” When he replied “yes”, she disappeared.

In the early hours of the morning, the shadowy figure of a hooded monk has been seen wandering the hallways and the reception area. The monk is said to have died in a fire at the Inn, whilst trying to save the children that were in his care.

The third ghost at the Hotel is that of a small boy, his apparition has been seen in the parliament room. The apparition is often usually reported by children, it is said that he makes his presence felt by appearing in photos taken by the guests. 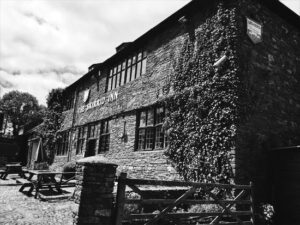 The oldest known reference to one of the Most Haunted Pubs in Wales, which nestles within the shadow of the Skirrid Mountain, is in 1110 when John Crowther was sentenced to death for sheep stealing and was hanged from a beam of the inn. The Beam is there till this very day.

Over the next eight hundred years 182 felons would meet a similar fate, dangling by the neck over the buildings stairwell at the Inn.

An unusual style of customer relations you may think, until you realise that, as well as serving up frothing tankards to thirsty travellers, the premises also doubled as a courthouse. Until, in the mid 19th century, it pulled out of the execution business altogether and has since dedicated itself to the sustenance of the living.

Needless to say, with such a sinister pedigree, The Skirrid Mountain Inn can offer many a ghostly tale to chill the blood.

The spirits of those executed here, are said to make their presences felt in a rather direct and disturbing way.

Many Locals & Guests at the Inn have felt the overwhelming sensation, of an invisible noose being slipped around their necks and have been alarmed to feel it getting tighter & tighter. Although, they always manage to break free from the strange grip, they bear the distinct impression of the marks of the rope for sometime afterwards.

Ghost Hunt at one of York’s hidden ghostly treasures, The Black Swan.

An elderly Victorian gentleman has been seen many times walking up & down the warped wooden staircase often tutting as people walk by.

Many cold spots have been felt at the same time. A barmaid , while closing late at night,  followed the ghost up the stairs believing it to be a guest staying over, only to discover he had vanished when he reached the top of the stairs.

The Black Swan’s main room, on the second level of the pub is wooden panelled room dating back to the 17th Century has thousands of grotesque figures and demons imprinted in to the panels.

People gets strange feeling of being watched almost like they are not alone in this room, dark shadows & the cries of a small child have all been added to reported paranormal activity at this location. 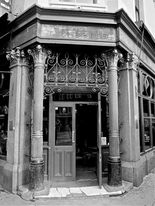 Many people attribute the spooky feeling inside this Spitalfields pub to its connection to the Jack the Ripper’s story. The Pub is linked to two of Jack’s victims, Annie Chapman and Mary Jane Kelly. It’s believed Annie drank at the pub before she was murdered and that the pub is where Mary Kelly used to find clients. Annie’s ghost is said to haunt the pub along with One of the pub’s Victorian landlords George Roberts was murdered with an axe and his apparition is said to have terrorised staff who stayed on the pub’s upper floors. There are also some gruesome tales of the murder of a baby that have so scared the life out of many psychics, they refuse to enter the rooms upstairs. 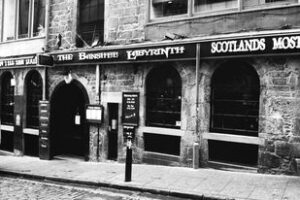 The Banshee Labyrinth describes itself as Scotland’s most haunted pub, with the main spooky antagonist being the eponymous banshee.

Should you fancy a different type of Scottish spirit from whisky and gin, then the capital really does have no shortage of pubs that claim to be haunted. Unsurprising really given its history, and perhaps part of what makes the city such a magical place to visit.

Behind all the cosmopolitan glamour and tourist trappings lies a darker, grimier past that is hidden in cobbled stairwells, claustrophobic vaults and ancient buildings. With the most famous story being that of the workmen who were once renovating the infamous pub. The group were working in the closed pub when they heard a crying noise before finding what appeared to be a young girl with her head in hands, crying. When approached, the mysterious female lifted her face to gaze upon the workmen with eyeless sockets, and screamed a blood curdling cry that caused the labourers to flee the pub.