The Last Walk for The Pendle Witches

On August 20th 1612 ten people convicted of witchcraft at the Summer Assize held in Lancaster Castle went to the gallows on the moors above the town.

Among their number were two men and a woman in her eighties.

Their crimes included laming, causing madness and what was termed “simple” witchcraft.

In addition to this some sixteen unexplained deaths, many stretching back decades, were laid at their door.

Lancashire, in the early y

ears of the seventeenth century, was remote, its roads poor, its people ill-educated.

Throughout the county there were places where the outside

world hardly intruded, and one such area was Pendle Forest.

It was here, among stark hillsides, infertile valleys and scattered hamlets, that the story of the Pendle Witches had its beginnings. 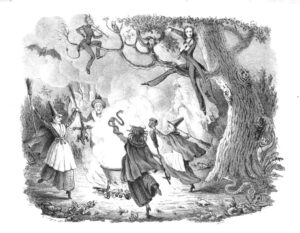 On March 18th 1612 a young woman by the name of Alison Device was out begging on the road to Colne.

She stopped a peddler from Halifax, John Law, and asked him for a pin.

He refused her request and walked away.

According to Alison’s own testimony her ‘familiar spirit’ in the shape of a dog, appeared to her and asked if she would like him to harm Law.

Alison was new to the art of witchcraft, indeed she seems to have resisted being indoctrinated into what was in effect the family business. But now she agreed that Law must be punished and she told the dog to lame the peddler.

No doubt to her great surprise, the curse took immediate effect and Law fell to the ground, paralysed down one side (presumably by a stroke) and unable to speak.

He was taken to a local inn and later Alison was brought to his bedside. She admitted her part in his illness and begged his forgiveness, which he gave. However, Law’s son Abraham had become involved, and he was far from satisfied.

He took the matter to Roger Nowell the local magistrate, and from there things snowballed at an alarming rate.

After hearing the most awful admissions from those he interviewed, Nowell made many arrests

By the end of April nineteen people (including a group from Samlesbury and Isobel Roby from Windle) were incarcerated in Lancaster Castle, awaiting trial at the August Assize. 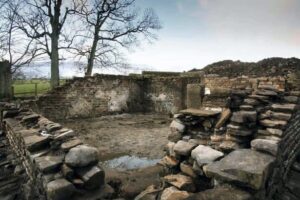 THE  ACCUSED AND THEIR CRIMES

The most famous of the Pendle witches actually died before coming to trial.

Elizabeth Southernes (“Old Demdike”) had admitted to Nowell that she was a witch.

In so doing she also implicated many of her co-accused, as did Anne Whittle (“Old Chattox”) who was herself accused of the murder by witchcraft of Robert Nutter.

Also implicated were members of both their families: Elizabeth Device, Demdike’s daughter, was accused of two murders, as was her son James, while Alison was to stand trial for what she had done to John Law on that fateful spring day five months before.

Others were dragged into the affair: John and Jane Bulcock, a mother and her son, were tried for causing madness, and for being at a so-called Witches Sabbath held at Malkin Tower on Good Friday 1612; Alice Nutter from Roughlee Hall, was accused of killing one Henry Mitton because he refused to give Demdike a penny; Margaret Pearson was accused of bewitching one of her neighbour’s horses to death, and Katherine Hewitt was accused of the murder of Ann Foulds.

Lancaster formed part of the Northern Circuit, and the Assize Court judges visited the town twice a year.

The trials commenced on Tuesday 18th August with Sir Edward Bromley presiding. First into the dock was Old Chattox.

She was accused of the murder of Robert Nutter some eighteen years previously. She pleaded not guilty, but eventually confessed when confronted by evidence given by Demdike and James Device to Roger Nowell back in April.

Elizabeth Device followed her into court. She stood charged with three counts of murder, accusations she vehemently denied. However, the Prosecution had a star witness in the form of Elizabeth’s own nine year old daughter Jennet.

Her evidence was devastating, and Elizabeth was so overcome with anger that she had to be removed from court.

Jennet told of familiar spirits, of the making of clay images in order to cause death, of the Sabbath supposedly held at Malkin Tower on Good Friday, where it was decided to blow up the castle and kill the Governor, Thomas Covell, in order to free those imprisoned there.

She spoke of witches mounting ponies and flying off on them before vanishing into thin air. Inevitably, Elizabeth was found guilty as well.

James Device was tried next. He was in a pitiable condition, and may even have been physically ill-treated during his imprisonment.

However, there was little sympathy for him and after more hearsay evidence, and his own testimony, he was found guilty along with Elizabeth Device

In conclusion, it seemed to be a range of exceptional circumstances that led to the extent of these witch trials.

Indeed, Lancashire was exceptional in the number of witch trials that were held, in comparison to other regions who experienced the same degree of social depravity.

The money that could be made from claiming powers in witchcraft in the 17th century probably caused the declarations made by the two families; they may have been in competition for the best reputation in the area.

This backfired and the wild accusations escalated, fuelled by a general feeling of unrest and fear of witchcraft across the country, making this the biggest and most notorious witch trial.