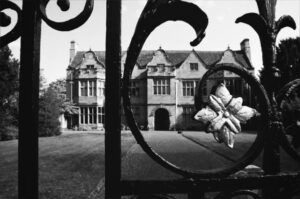 Built on the site of the 12th century medieval St. John’s Hospital, this elegant stone mansion was to be the home of the Stoughton family. In the 1660’s the house was extensively altered, and enlarged to it’s present size. By the end of the 18th. century the house had become a private school, and at the start of the 20th century was being used as a records office by the army.
In 1960 the County Council bought the property and, a year later, opened it as a branch of the County Museum, dealing with folk life, costume and the history of the Royal Warwickshire Regiment. Museum.

What will you encounter on your overnight ghost hut with Haunting Nights in the heart of haunted Warwick, Warwickshire?

The known history of the land on which St John’s House stands, dates to 1154. At this time, it was given to the establishment of the Hospital of St John the Baptist and founded by the 3rd Earl of Warwick, with the purpose of offering accommodation to wayfarers, pilgrims and poor within the local area.

There was also a cemetery attached to the hospital.

In 1540 St John’s was granted to Anthony Stoughton by Henry VIII, having been in his majesties service.

In 1563 the grant was confirmed by Queen Elizabeth I. Anthony Stoughton never resided at the property but leased it out.

Many of the Stoughton family members held positions of authority in the town of Warwick. The house remained in the possession of this family up until the 1780’s.

Above the porch entrance to the house the faded words ‘Education’ can be seen. A reminder of when the building was rented out from the Earl of Warwick to become a school in 1791. Known as St John’s Academy for boys or ‘Young Gentlemen’, the school offered writing, arithmetic, book-keeping, dancing, military exercise, ‘washing and mending’ to its pupils. The graffiti of supposedly mischievous boys can still be seen around the house. The house remained an educational institution becoming a school for young ladies 1828. In 1845 it once again became a school for young gentlemen and then back to a school for young ladies in 1884 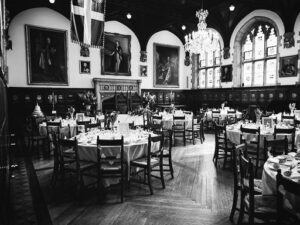 The  history of St John’s House has many stories of tragedy.

Jane Stoughton on returning from a ball ventured into the parlour to find the fire in need of fuel. As she set about refuelling the fire her clothing set alight and she was terribly burned. She sadly died from her injuries on March 22nd, 1755.

Ann Stoughton is said to have died as the result of fright after a burglar threatened to kill her, holding a knife or razor to her throat. The offender fled after she screamed out ‘very violently’. It is thought she knew the offender, but she refused to disclose their name after she discovered the penalty for such a crime was death by hanging.

Eugenia was an interesting and ‘eccentric’ family member. She would sit in an armchair refusing to go to bed

She was the Stoughton family ‘cat lady’ with her fondness of cats, erecting a monument to the local butcher who provided the cats meat.