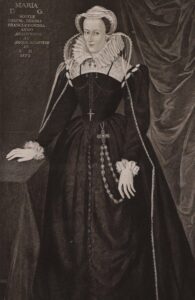 On 2nd May, 1568, Mary, Queen of Scots escaped from Lochleven Castle were she had been imprisoned by the Scottish lords and fled to England to gain aid from her cousin Elizabeth I to recover her throne. “The daughter of debate” as Elizabeth I was known to refer to her, had, by her actions placed the English Queen in a dilemma. Her strong political sense urged that she should support the Protestant Scottish lords, but she also felt a sense of outrage that a fellow sovereign should be treated in such a manner. To keep Mary in England was to incur risks of her being the focus of Catholic plots, to return her to Scotland might be sending her to her death, but to send her abroad could mean her bringing a foreign power into Scotland. Elizabeth characteristically opted for what she considered to be the safest option and imprisoned her Scottish cousin in England.

Mary was sent to Tutbury in 1569. The journey was long and cold and she fell ill on the way. As the castle was not yet ready, they had to stay in Sheffield for a while. On the 4th February 1569, the queen and sixty attendants, including her gaoler Knollys, rode into Tutbury Castle

‘This medieval castle, was of all her many prisons the one she hated the most. She always maintained afterwards that she had begun her true imprisonment there, and this in itself was sufficient reason to prejudice her against it; but Tutbury quickly added evil association of its own to combine with her innate distaste. The castle, which was large enough to be more like a fortified town than a fortress, occupied a hill on the extreme edge of Staffordshire and Derbyshire from which the surrounding country could be easily surveyed. Since the early sixteenth century, the structure originally built by John of Gaunt had been virtually falling down, and as a Dutch surveyor reported in 1559, only indifferently repaired, hence the powerful need to bring hangings and furnishings from Sheffield. Not only was Tutbury in many parts ruined but it was also extremely damp, its magnificent view of the Midlands including a large marsh just underneath it from which malevolent fumes arose, unpleasant enough for anyone and especially so for a woman of Mary Stuart’s delicate health.’

Shortly after arriving, Mary’s keeping was handed over to George Talbot, Earl of Shrewsbury, Constable of Tutbury Castle. Shrewsbury remained her gaoler with only a few respites for the next fourteen years. Mary’s life began its depressing and monotonous decline, and her health began to deteriorate due to inactivity and confinement. Although she loved the outdoors and physical activity she was restricted to embroidery, playing cards and reading. She worked on many of her embroideries at Tutbury along with the formidable  Bess of Hardwick, the wife of the Earl of Shrewsbury, whom she befriended. At the end of February 1569, Nicholas White, who was travelling to Ireland on behalf of William Cecil, called at Tutbury to visit the Queen of Scots.

Mary was moved to Wingfield Manor in April of 1569, but was returned to Tutbury in September with an increased guard and a much reduced household. In November 1569, due to alarm caused by the Catholic Rising in the North of England, she was moved hurriedly to Coventry. After the rebels were defeated, she was again sent to Chatsworth House in May 1570.

In January of 1585 she was moved again to Tutbury and was this time guarded by Sir Ralph Sadler, Chancellor of the Duchy of Lancaster. He was kind to Mary, finding his task as distasteful. This news caused consternation at the court of Elizabeth in April 1585 he was replaced by the puritan Sir Amyas Paulet, who Mary came to actively dislike. One of his first actions was to remove her chair and royal cloth of estate. Despite her tears, he remained unmoved and also curtailed her popular charitable activities in the town. Mary had been previously allowed to walk in the privy garden within the Castle walls, but under Paulet, she was held in the strictest confinement and was npt permitted to walk outside  “for that heretofore under colour of giving alms and other extraordinary courses used by her, she has won the hearts of the people that habit about these places, where she has heretofore lain”.

On Christmas Eve 1585, she was moved for the last time to Chartley Hall. After the discovery of proof that she was plotting against Elizabeth’s life, she was sent to Fotheringhay Castle in Northamptonshire where she was beheaded in 1586. 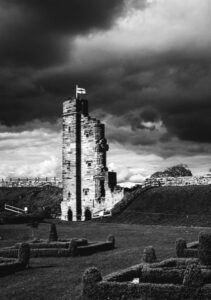 There are several ghosts that are said to haunt Tutbury Castle making it one of the most haunted places in Staffordshire. Mary Queen of Scots is said to be among them. She must have hated Tutbury Castle since it served as her prison so often, but nevertheless, she appeared to a group of 40 men in 2004 standing atop the South Tower. This was not the first time that she has been seen in the castle. In the 1980s, a serving Marine also reported seeing her walking across the grass. She has been seen by archaeologists participating in a dig at the castle and by a senior member of the castle staff who has previously denied all paranormal activity! The credibility of the witnesses that have seen her give weight to the claim that Mary Queen of Scots is indeed haunting Tutbury Castle.

The castle also plays host to a variety of other ghosts including a mysterious man in a full suit of armour, the White Lady in the North Tower, a little boy in a white shirt and a little girl named Ellie who trying to pull rings from visitors’ fingers