Ghostly goings on in Whitby with Haunting Nights

The small town of Whitby in Yorkshire was the setting for the famous Bram Stoker’s Dracula, and its cobbled streets and quaint cottages have helped it to become one of the most well known gothic towns in the world. Whitby was once a successful whaling and fishing town, and still earns most of its income from fishing and tourism. While Whitby seems a quiet fishing town by day, at night it has become known for its many ghostly apparitions. 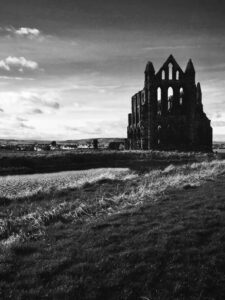 The Whitby Abbey ruins are a reminder to all of the power of the medieval church. The Abbey was built in 657 AD and founded by St. Hilda, whose ghost is rumoured to roam the Abbey, where she peeks from one of the highest windows. This ghost also gained fame with her mention in Bram Stoker’s Dracula, but she is not alone in her ghostly haunting. She is joined by Constance de Beverley, who was a nun who broke her vows of chastisty. When this was brought to light, she was bricked up alive inside the Abbey walls, and her ghost is still heard today pleading for her release.There are more of Whitby’s ghosts found in one of the two lighthouses on its coast. One lighthouse is said to be visited by a one-armed ghost of a man who fell to his death onto the rocks under the lighthouse. This entity does much more than simply try to scare visitors to the location, he attempts to trip them so they can join him in his death.

Whitby is also home to the Barguest Hound, which is said to be a glowing eyed hound of hell. This hound is said to roam the streets, and only those who are going to die soon are able to hear it deathly growl.

There are several hotels that are said to be home to many ghostly visitors, the oldest being a Tudor mansion built in 1516.  The Bagdale Hall is said to be haunted by its former owner Browne Bushell, who was executed for his acts of piracy. The ghost of Browne is said to roam the halls and stairways, and has also been blamed for several reports of poltergeist activity within the Hall. 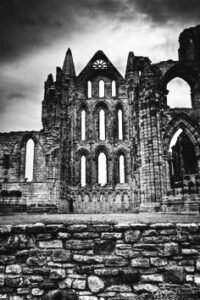 s of Whitby are also home to many ghostly apparitions that are said to meander through the streets after dark. One of the ghostly wanderers is the Barguest Coach, which is pulled to the graves of sailors in St. Mary’s Churchyard by a team of headless horses. The passengers are the skeletons of sailors who make the trip on the third day after the funeral to pay their respects and gather the corpses of the fallen sailors so they can join them. What will you find when we go to the Yorkshire Coast Ghost Hunting looking for the Most Haunted places in Whitby.