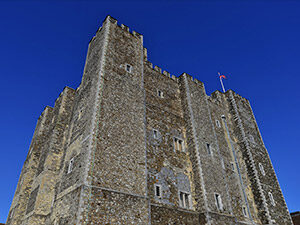 One of Haunting Nights very top locations the team have visited.

Known as the ‘key to England’, the magnificent fortress of Dover Castle has played a crucial role in the defence of the realm for over nine centuries, a span equalled only by the Tower of London and Windsor Castle. It was founded in the 11th century. Dover Castle is a Scheduled Monument, a Grade I listed building, and recognised as an internationally important structure. The castle, secret tunnels, and surrounding land are now owned by English Heritage and the site is a major tourist attraction.

The castle is reputedly one of the most haunted in Great Britain. A number of apparitions are said to have been sighted here. These include:

A headless drummer boy said to have been murdered during the Napoleonic Wars, who now wanders the battlements; the Woman in Red walks the Keep (pictured above courtesy of Michael Garlick); a Cavalier has been sighted in the grounds as have a number of phantoms in “Royalist Garb”; a Roman soldier and a monk haunt the area of the Roman ‘pharos’; World War II phantoms have been reported in the Underground Tunnels. Audible phenomena have been reported that include screams, cries and whispering voices; doors open and close on their own in various parts of the castle; and temperature drops have been reported.