Ireland is a country full of ruined abbeys and drowned villages, of terrible stories of famine, coffin ships, and disaster, of gale winds and dark storms, of remote islands, cut off from the mainland. It is a country abandoned by thousands in search of a better life, many never to return. In short, Ireland is a country made for ghost stories…

One might expect Charleville Castle to be in Charleville in County Cork but it’s actually nearly 100 miles away in county Offaly near the town of Tullamore. It’s a Gothic Style Castle but on approach many visitors get reminded of “Little Tin Soldiers”.

Haunting Nights travel to Ireland for  ghost hunt to remember and we want you to join us!

The Castle is situated in Ireland’s most ancient primordial oak woods which were once the haunting grounds of Ireland’s ancient Druids and is said to be one of the Most Haunted Castles in Ireland.

Charleville Castle developed from paper doodles in early 1798 to a grandiose structure ,  by the end of what was a very eventful year in Ireland. It was built by the Earl of Charleville, Charles William Bury, having been designed by Francis Johnston, one of the leading architects of the time. It is said to be the finest example of gothic-revival architecture in the country. This is a veritable Gothic Castle of grand proportions. It owes its “Tin Soldier Fortress” appearance to the celebration of victory over the third French revolutionary expedition to Ireland which was the first decisive victory by British forces over the revolutionary republican movement, which was sweeping across the Monarchies and their colonies at that time. This Gothic dream, a monument not only to a now forgotten power, but also to the people who made it possible, the Irish craftsmen and impoverished people took fourteen years to complete.

The Castle is reputed to be haunted by a little girl named Harriet who was youngest daughter of the third Earl of Charleville. Harriet died tragically in the main staircase of the building at the age of 8 in 1861. Her presence in the castle has been reported many times by a variety of people. There are reports of her singing in the middle of the night, laughing, screaming, etc…Some people even believe they have caught her on their cameras as they can see shadows or mists on the pictures taken within the castle.  Others have also claimed to have seen images of a little girl with a blue and white dress, with golden curls with blue ribbons in the hair. 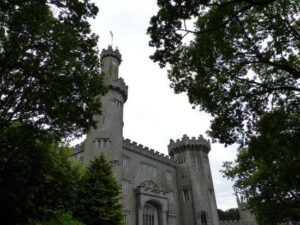 The Castle has been investigated by numerous paranormal investigators and psychics from around the world. Charleville Castle appeared on Living TV’s Most Haunted and ABC Family’s Scariest Places On Earth, as well as on Ghost Hunters International. Join Haunting Nights In 2021 as we travel to one of Ireland’s Most Haunted Castle