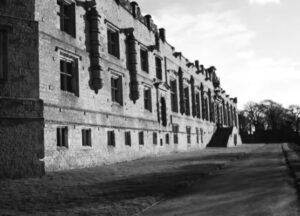 Commanding spectacular views over the county of Derbyshire, Bolsover Castle, was designed to impress.

William Peveril, one of William the Conqueror’s knights, founded the castle in the late 11th century.

However, it was neglected from the mid-14th century.

Its ruins provided the setting for the Little Castle begun in 1612 by Sir Charles Cavendish as a retreat from his principal seat at Welbeck, a few miles from here.

Since 1984 the castle has been in the care of English Heritage, but some say that the castle is still home to shades from its past.

Some visitors have reported spectral smells of horses coming from the empty former riding school whereas others claim to have been subjected to spiritual slaps. 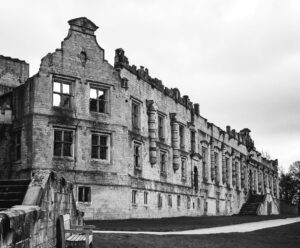 A Grey Lady which is seen walking through the grounds and Sir Charles Cavendish himself is said to still wander the corridors. However, the most well known story associated with the castle, is also its most pitiful.

The apparition of a young woman has been reported in the kitchens of the castle.

She has been described carrying a bundle under her arm and of being of a tearful disposition.

She makes her way towards the oven doors, and throws in the bundle she was holding, upon which screams of an infant have been heard.